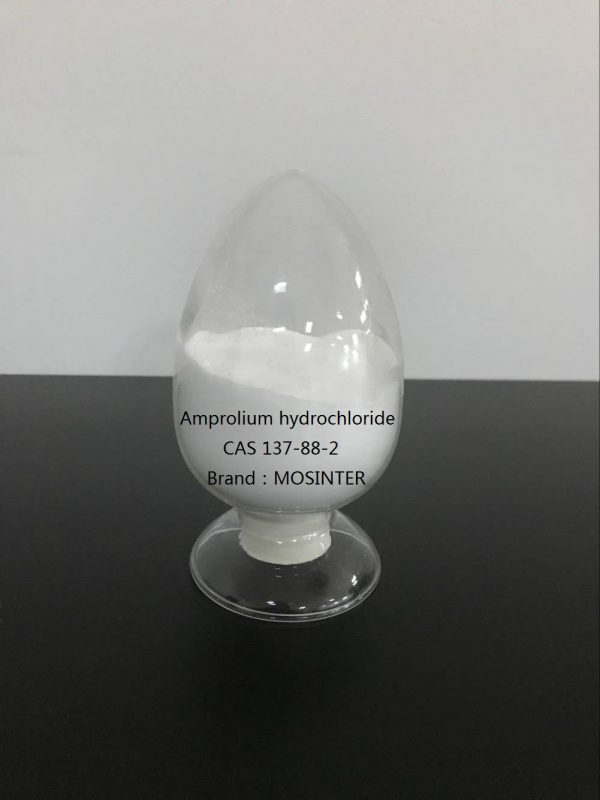 The drug is a thiamine analogue and blocks the thiamine transporter of Eimeria species. By blocking thiamine uptake it prevents carbohydrate synthesis.

Despite only moderate efficacy it is well favoured due to few resistance issues and is commonly used in conjunction with sulfonamides prophylactically in chickens and cattle as a coccidiostat.

Coccidia are protozoans that can wreak havoc in a flock of poultry by an infection known as coccidiosis. Agents that control this disease–coccidiostats–are in view of the world’s heavy dependence on poultry as a source of protein, of great economical significance.

Condensation of ethoxymethylenemalononitrile (1) with acetamidine (2) affords the substituted pyrimidine (4). The rxn may well involve conjugate addition of the amidine nitrogen to the malononitrile followed by loss of ethoxide (3); addition of the remaining amidine nitrogen to one of the nitriles will then lead to the pyrimidine (4). Reduction of the nitrile gives the corresponding aminomethyl compound (5). Exhaustive methylation of the amin followed by displacement of the activated quaternary nitrogen by bromide ion affords the key intermediate (7). Displacement of the halogen by α-picoline gives amprolium.

Soluble in water, methanol and ethanol, slightly soluble in ether, insoluble in chloroform.

Mink and other spore coccidiosis to 120mg / L drinking water concentration, once every 30 days, can effectively prevent the oocyst.

Intermediate in the production of vitamin B1 as raw material, by cyclization, hydrolytic ring, then diazotized amino transformed into hydroxy, the condensation reaction.

Amprolium chemical structure similar to thiamine, is the traditional use of anticoccidial medicine, with better anticoccidial effect, is still widely used in countries around the world.

Amprolium competitively inhibit coccidia of thiamine uptake in cells, thiamine pyrophosphate was synthesized as thiamine, to participate in the process of oxidative decarboxylation of glucose metabolism reactions α- keto acids, keto acids are α- dehydrogenase coenzyme, thiamine deficiency due Amprolium hydroxyethyl group, can not be phosphorylated pyrophosphate, many reaction does not proceed, interfere with carbohydrate metabolism during intracellular parasites, which inhibits the development of coccidiosis .

Amprolium chicken coccidia peak effect, is to prevent the formation of the first generation schizont merozoites, moreover, sexual cycle of coccidiosis and the oocyst sporulation also has inhibitory effect kill.

Since the structure and thiamine Amprolium similar, can produce competitive antagonism, if Amprolium drug concentration is too high, can lead to thiamine deficiency chicks while the performance of multiple neuritis, thiamine, although by feeding chickens can Rehabilitation , but significantly affect Amprolium anticoccidial activity. Allegedly, per kilogram of feed containing more than 10 milligrams of thiamine, the anticoccidial effect of chlorpromazine morpholino began weakening.